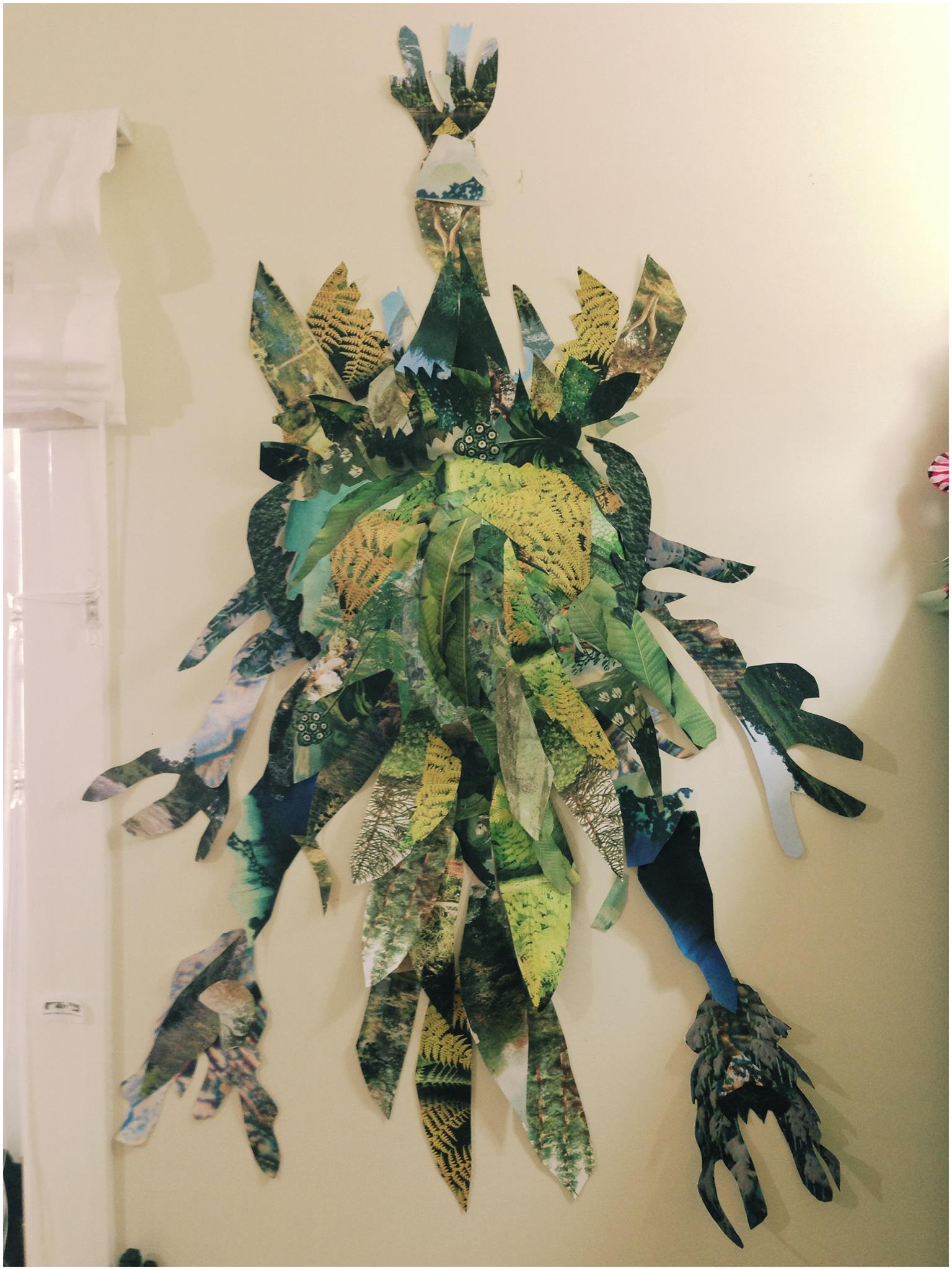 I see this psychopomp as a navigator, a family tree, a place holder, a guide, an emblem of peacetime ephemera, an assemblage of fragmented and nostalgic representations of original love. The beginning, where we came from, where it all comes from…

I’ve been reconstructing my unconscious space. I’m giving form to the hectic desires and thoughts that crowd my subconscious. I’m hoping to free up some room by gluing down these memories and musings in matter.

Why does this matter matter? I seem to be bumping into my senses all the time, everything is overloaded with meaning and therefore, messages. My nerves are shot, they send information to my brain- when there is no information to relay. Only imagined info, a surplus of simulacra stuffing up my stratosphere (See alliteration! -so much of the same, suffocating in its own meta mimicry).

Freud explains that when desire encounters a prohibition it cannot otherwise circumvent, it retreats to the unconscious, where it remains active but escapes detection.  The prohibition meanwhile remains “noisily conscious.” (Freud, Totem and Taboo, 30.) We are compelled to avoid certain acts and to repeat certain others, but we no longer understand why, until finally the burden of avoiding what we want to do dictates everything that we allow ourselves to do. Desire, however, is energy. As long as it’s held in “tension”, it seeks out every available means of discharge. So it takes the detour of the sign. Forbidden to satisfy itself directly, it turns its energies onto “substitute objects” and aims. 1

So I’m migrating, there is a war in my senses and I’m not only letting the boats of my unconscious in, I’m relocating them, giving them visas and building their churches. I could possibly build hundreds of cities with all these replications and parallel presents 2 I carry in my subliminal perceptions. But I’m not building it so they will come, I’m building it so I can see it, and hopefully not just bump into it, Like Mr Magoo.

Psychopomps, Psychopompos (from the Greek word ψυχοπομπός – psuchopompos, literally meaning the “guide of souls”) In Jungian psychology, the psychopomp is a mediator between the unconscious and conscious realms. 3A totem is a being, object, or symbol representing an animal or plant that serves as an emblem of a group of people, such as a family, clan, group, lineage, or tribe, reminding them of their ancestry (or mythic past). 4